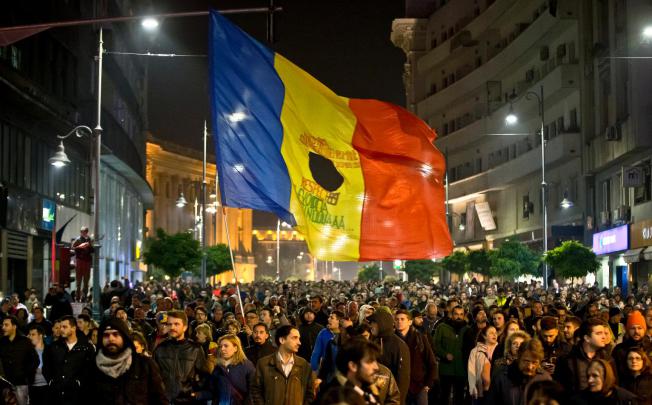 I am writing this blog with great sadness: this year’s Halloween celebration was marred by heart-breaking tragedy in (at least) two places in the world.

One of them was my native Romania where an album launching concert at a night club in central Bucharest (Romania’s capital) ended in fire and tragedy: 32 young people died and 130 more are in hospital – of which at least 90 are in intensive care in a critical state. This tragedy took place on Friday the 30th of October at 22.36 pm. The whole nation is in mourning and took to the streets in protest to the government’s corruption, which means that fire safety rules are rarely enforced. As a result, the prime minister resigned, together with the whole government.

The fire engulfed the Colectiv night-club in Bucharest during a heavy-metal rock concert. A spark ignited foam decor in the basement club during a pyrotechnics show and within ten seconds the whole ceiling was on fire. Five hundred people simultaneously rushed for the exit. Sadly, some of them did not make it. In an extraordinary and premonitory fashion – the first song on the band’s new album was entitled: “The way we die” with lyrics such as: “cause the day we give in is the day we die” and “another row jumps into the flame”.

Only a few hours’ flight away from Bucharest, in Egypt, a plane carrying 224 people broke apart in midair just a few hours after the fire in Bucharest. This tragedy took place on Saturday morning, the 31st of October at 6.20 am in the Sinai peninsula, 300 kilometers north of Cairo (I used Cairo as the place for the event). The flight had just left the Red Sea resort of Sharm-el-Sheik and was headed for St. Petersburg in Russia, carrying mainly russian holiday-makers returning home.

So what was going on in the skies at this time? These are the charts of the two events which are only a few hours apart:

We notice that for both events, the Moon (the barometer of the day) was in Mrigashira nakshatra. This nakshatra covers the portion of sky from 23.20 degrees of Taurus to 6.40 of Gemini. Nakshatras are also called the “mansions of the Moon”. The Moon stops in each nakshatra for approximately one day a month (there are 27 of them in total). Each nakshatra has a planet as its lord. The flavor of that nakshatra and its lord imbue that particular day with its qualities. Mrigashira’s symbol is a deer (its name means “deer’s head) and it is associated with travel (since deer constantly travels on well-known paths) and powerful desires.

The lord of Mrigashira is Mars. This means that every month, on the one day the Moon transits through Mrigashira, Mars become a key player in the events of that day. Unfortunately, as we shall see, for the whole month of October, Mars (fire, violence, accidents) has been locked into a mutual aspect with the great malefic Saturn (death, misfortune, suffering)**. When the Moon entered Mrigashira on Friday afternoon in Romania, it ignited this difficult combination between Mars and Saturn. It is a combination that is famous for its intensity and destructive potential. The Romanian band had been advertising the concert as something that had never been seen before, that would transport its fans to a “different world”. They were planning an over-the-top event during an astrological time of great intensity, on a day when that intensity would be extremely active, a time when one should purposefully tone down one’s activities, as much as possible. 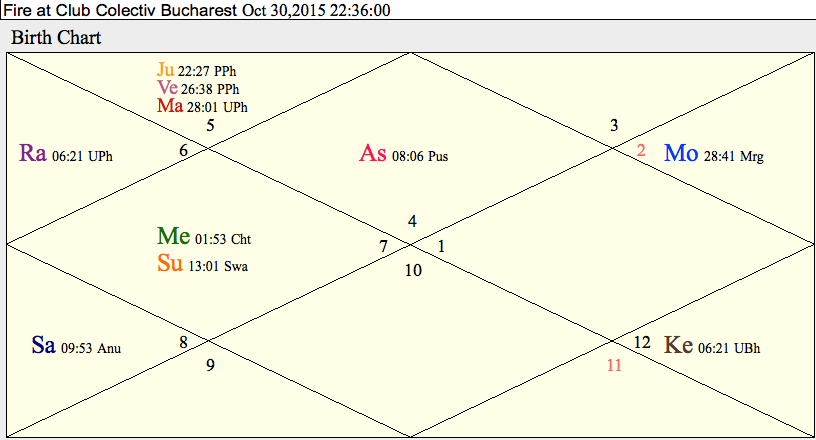 The ruler of Cancer is the Moon. In this chart, The Moon can be found in the 11th house of friends, clubs and societies where it receives a direct glance from Saturn which is in mutual aspect with Mars, while also being – since it’s a Cancer rising chart – the lord of the 8th house of death. This Moon truly got the look of death on this day.

Furthermore, this Mars-Saturn combination aspects all planets with the exception of Mercury and the Sun, which means that many areas of life would be impacted by it. And indeed, an entire country was affected by this tragic event and took to the streets.

While the Mars-Saturn combination occurred over the whole of October, it was on days such as this one, when the Moon transited through nakshatras owned by either Saturn or Mars (6 in total) that one should have been extremely prudent.

If we also use the dasa sequence (the timing mechanism specific to Vedic Astrology) to see which other planet was calling the shots at the time of the event (apart from Mars), we see that the event took place in Mars-Saturn (main period Mars, secondary period Saturn). The Mars-Saturn combination was already on our radar as the main culprit but this finding further adds to the body of evidence.

Here is the dasa sequence for the time of the fire – look at the top for the current dasa (the dates are in European format -day/month/year): 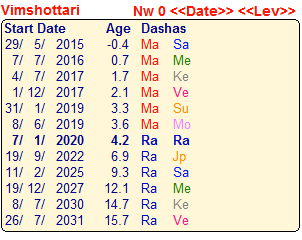 As you can see Mars-Saturn is followed next year in July by Mars-Mercury. Mercury rules the 12th house of imprisonment in the chart of this event. I predict that at that time the culprits will be indicted and will start their prison sentences.

Moving to the plane crash in Egypt, the sky looks pretty much the same, except that the ascendant has changed: from Cancer to Libra, whilst the Moon has moved from Taurus to Gemini. It is still in Mrigashira nakshatra though, giving Mars the power to influence all events.

Here is the chart again. 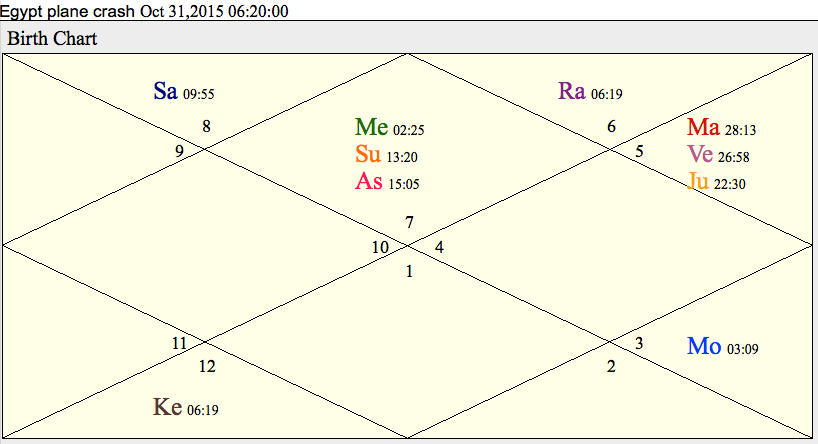 Libra is ruled by Venus who has gone to the 11th house in this chart, in very close proximity to Mars (a bit over 1 degree away). For a Libra chart Venus also rules the 8th house of death. We would like this Venus to be free of affliction from the natural malefics (Saturn, Mars, Rahu and Ketu). Alas, Venus is conjoined Mars (same sign) which is locked in a deadly embrace with Saturn that aspects all the planets in that 11 house: Venus, Mars and Jupiter.

When checking the dasa sequence again for confluence – to see which players were on stage at that time, we find it was Mars-Venus. We already know Mars is a harbinger of violence and destruction (due to its innate qualities but also due to its current association with Saturn). 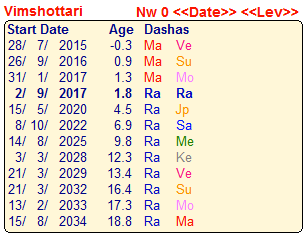 As for Venus, it is the lord of the 8th house of death and under the influence of the destructive Mars-Saturn combo.

Both events have three major things in common. They both happened at a time when:

Fortunately, Mars moved out of fiery Leo and into earthy Virgo on the 3rd of November. This is also the end of the Mars-Saturn combination – so we can all breathe a sigh of relief for now.

Our thoughts and prayers are with the victims of these two tragedies and their families.

*Notice the number 4 at the top of the chart in the first house – it means the sign in there is the 4th sign of the natural zodiac which starts with Aries. So Aries, Taurus, Gemini, Cancer.