Here is a man who leaves no one indifferent – whether you love him or hate him, whether you think he’s arrogant, racist and delusional, or smart and authentic – The Donald is the kind of guy who incites passions and controversy.

When Trump first announced he was running for president, he was dismissed as a joke. A wheeler-dealer with lots of reality TV experience but none whatsoever of elective office wants to be commander-in-chief? Surely, no one could want this erratic tycoon’s fingers anywhere near the nuclear button. But for months now he has led the polls for the Republican nomination despite saying things that would have torpedoed any normal campaign.

For those who have been living in a cave somewhere for the past three decades and have no idea who Trump is, here is a short synopsis. He is a real estate mogul from a very wealthy family whose worth is estimated at around 2.9 billion dollars. He made his fortunes in the ’70s and ’80s in the Manhattan property market, almost went bankrupt in the ’90s but bounced back in the late ’90s. His fame came in 2003 with his reality show The Apprentice and its famous tag-line “You’re fired!”. He is currently seeking the Republican party’s nomination for president in 2016. 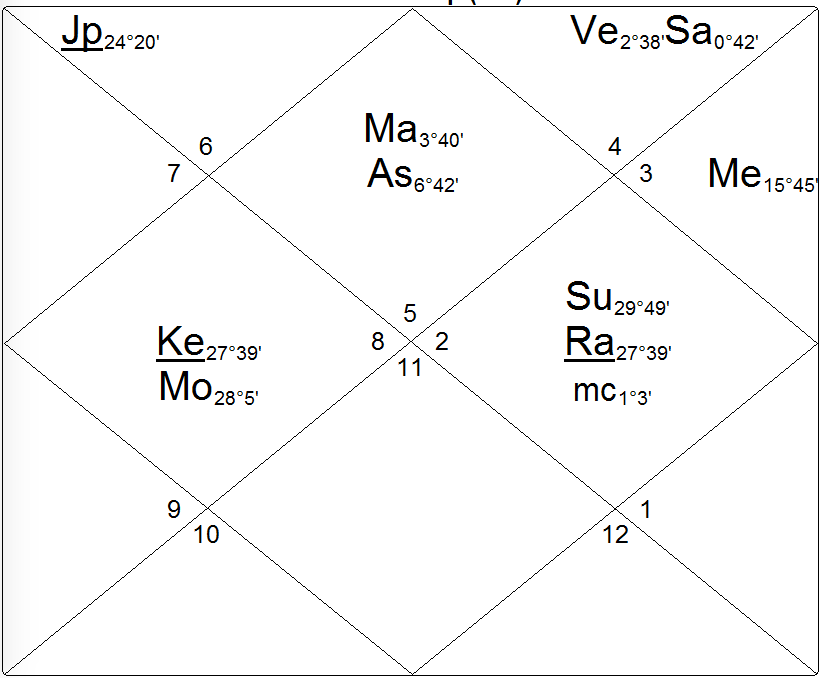 Trump doesn’t have as many yogas (planetary combinations that support success) in his chart as one would expect, given his wealth of achievements. His most notable yoga perhaps is the feared Kala Sarpa Yoga (all planets on one side or another of the Rahu Ketu axis). Kala Sarpa Yoga can give great rise or fall in life – depending on the overall disposition of the chart.

Trump’s ascendant is the royal Leo, the sign of royalty, leaders and executives – people with authority and clout who like to move in the exalted circles of power. Furthermore, in his chart, the Sun (ruler of Leo) sits in Taurus (pragmatism, materialism) in the 10th house of executives, people in charge, management. Here it achieves an extra level of strength (directional strength or dig bala), giving his already regal sense of self an extra boost.

Conjoined this regal Sun is Rahu the troublemaker. Since his full Moon is conjoined Ketu, this suggests he was born close to a lunar eclipse – and indeed, a full lunar eclipse took place that day just two hours after Trump was born. Eclipses are times of instability and confusion, as the earth is plunged into darkness, and birth around such a time imparts some of these qualities to the life of the native. As such, eclipses are powerful omens that should never be ignored – just another reason why The Donald should be regarded as potentially more dangerous than initially thought.