﻿While chatting with an old friend the other day, we started talking about the movie Rush. Though no fan of Formula One, I really loved this movie which is based on a true story. I remember leaving the cinema deeply intrigued by its two main characters, their radically different styles and personalities, and their complex relationship. I also left the cinema determined to have a look at their charts.

For those unfamiliar with the movie – it is a sports drama centered on the rivalry between race car drivers James Hunt (on the right side in the picture) and Nikki Lauda (on the left). The movie focuses on the events of the 1976 World Championship, a season that proved to be one of the most dramatic and controversial on record. At this point I should warn you that this blog might contain some spoilers (although I’ll strive to keep them to a minimum), so if you plan to see the movie at some point, you should stop reading here.

Hunt and Lauda are almost polar opposites. Lauda is a very serious, cool, calculating Austrian technical genius whose focus is precision. Hunt is a brash, eccentric young Englishman with a love for parties, intoxicants and women.

Lauda comes from a wealthy family who disapproves of his racing ambitions. His Formula One racing career starts partly as a result of his mechanical abilities – he uses them to reconfigure his car to make it faster. Throughout his career, his mechanical knowledge and abilities play a big part in his success. Lauda wins in total three Formula One World Championships – a huge achievement in this field. In 1976 he gets severely injured during a race. Half his face and head are burned off, leaving him permanently disfigured. This, however, does not stop him from returning to racing, only six weeks later. Upon retirement from racing, Lauda sets up his own very successful aviation company.

James Hunt is a very different character from Lauda. He is famous for his indulgence in alcohol and sex and his controversial lifestyle – turns up at formal functions in jeans and bare feet, parties frequently and is known to use cocaine and marijuana. His love-life is tumultuous and he has a hard time holding on to relationships. As for achievements, he wins the World Championship only once, in 1976. He retires soon thereafter and goes on to become a sports commentator with a reputation for sarcasm and a very dry sense of humor. He dies of a heart attack at 45.

Throughout their career, Hunt and Lauda had an intense rivalry.

Here is Nikki Lauda’s chart (sidereal chart) – courtesy of Astrotheme. Note all planetary positions are with respect to the sidereal zodiac. 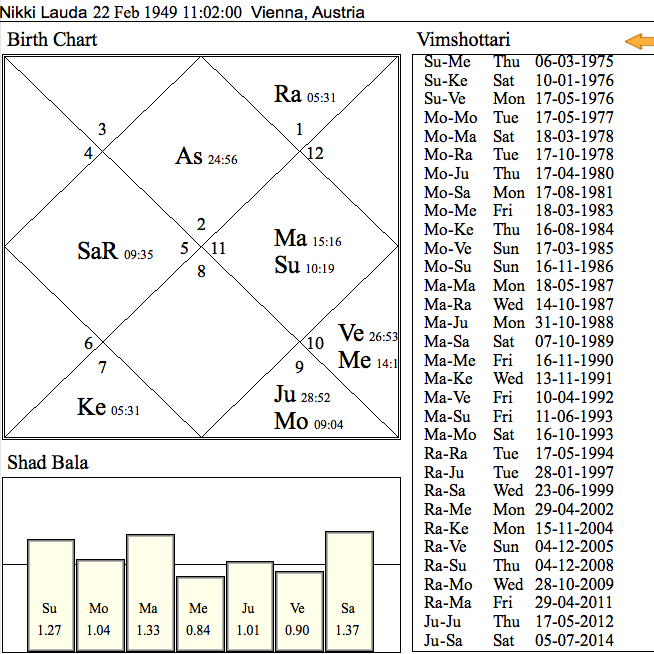 One thing that stands out when looking at this chart is the exclusive presence of strong natural malefics in kendras. This explains his engineering and technical talents, and imbues him with the incredible toughness which at times shocked others, like when he donned a racing helmet right over his 3rd degree facial burns only 6 weeks after his horrific accident, and returned to racing. Mars and Saturn in mutual aspect also give him a lot of intensity and drive, while their aspects on the Ascendant give him reserve and a calculated nature (Saturn) and courage and a love of speed (strong digbala Mars).

Another thing that stands out in this chart is the plethora of good yogas (combination of planets giving rise in life)  involving very strong planets. The yogas take place in positive houses and involve lords of positive houses too – a situation that only amplifies the good the yogas are bound to deliver.

And last but not least, a reasonably strong Lagna (Ascendant) allows the powerful yogas in this chart to really give. Lord of the 1st house Venus (Lagnesha) is in the house of a friend, involved in yoga with Mercury (forming one Dharma Karma Adhipati yoga and one Dhana yoga).

The only chink in the armor of this Ascendant is the strong affliction from the two powerful natural malefics: Mars and Saturn.

Not only is the ascendant reasonably strong in this chart but the Moon and Sun Lagnas are also both very strong – making for an individual with a strong body and personality (Lagna), mind (Moon) and soul (Sun). The Moon is associated with its dispositor, which greatly strengthens the Chandra Lagna. Surya Lagna is also strong, due to the Parivartana yoga (exchange of houses) between Sun and Saturn.

The other yogas in the chart are: Maha Parivartana yoga between Saturn and the Sun as lords of the 4th and 10th house and a Dharma Karma Adhipati yoga between the same planets. Another Dharma Karma Adhipati yoga is formed between Saturn and Mars (as lords of  the 7th and 9th houses). And last but not least, the 4th house of vehicles is also strengthened by the aspect of a strong Jupiter.

In conclusion, a lot of houses in this chart are exceptionally strong: 1st house (of self), 4th (of vehicles), 5th (of merit and money), 10th (of career), 7th (of other people, associates, partners) and 8th (of longevity and other people’s money), 9th (of luck and wealth). So we are looking at a chart where all the good houses, those houses that bring all the good things in life: success, recognition, money, relationships – are strong.

Unfortunately, two of the same planets that give him rise and fame in life (Mars and Saturn), also afflict the 1st Bhava of the body.

Lauda had his near-fatal accident on the 1st of August 1976, during the Sun-Venus dasha. Sun is conjoined with the accident significator Mars and aspected by the malefic retrograde Saturn. Thus both Mars and Saturn come into play during the Sun dasha. Unfortunately, they not only afflict the dasha lord Sun (which also signifies health and vitality), but also the 1st house (which signifies the body in general, and more specifically the head). The bhukti lord Venus, is also the 6th lord of accidents. Lauda suffered severe burns (Mars) on his head (1st bhava). It did not help that bhukti lord Venus is situated in the 12th house from the dasha lord Sun – an arrangement that spells isolation and loss during the Sun-Venus dasha – in his case long-term hospitalization and the loss of his “looks”.

Below is the chart of James Hunt (also sidereal) – Birth details also courtesy of Astrotheme. 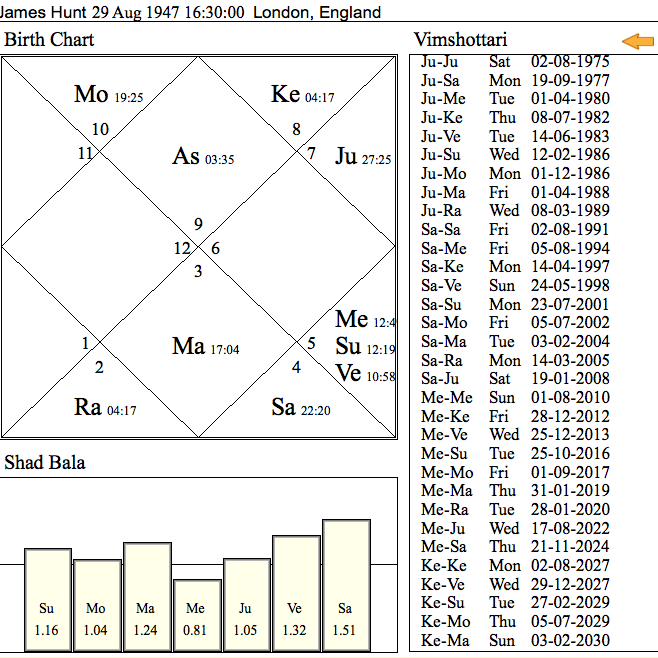 As you can notice, the Lagna and yogas in this chart lack the punch of those in Lauda’s chart.

The Lagnesha (Ascendant lord) Jupiter, has gone to the 11th house of friends, aspirations and desires but it is not involved in yogas, as in Lauda’s case. Moreover, it sits in the house of its enemy, Venus. Just like Lauda’s case, the Lagna receives the aspect of Mars, affording him ambition, courage, a love of speed and a passionate nature in general.

Also similar to Lauda’s chart are the strong Moon and Sun Lagnas (the Moon Lagna is strengthened by the Parivartana yoga, while the Sun Lagna is strong due to the Sun being in its own sign of Leo).

The strength of all three lagnas seems to be a very relevant factor in the makeup of a champion.

Back to Hunt’s chart, his 9th house (of good fortune, sense of purpose) is host to several yogas, including Raj Yoga (name and fame) between the Sun and Mercury, a Dharma Karma Adhipati yoga (effort and opportunity) between Mercury and the Sun and a Dhana yoga (wealth) between Sun and Venus. However, there is a problem with these yogas: some of the participants are weak, since Mercury and Venus are both combust. The Sun is strong in its own rashi, but the weakness of Mercury and Venus dilutes somewhat the power of these yogas.

This, combined with the weaker, non-yogic Lagna/Lagnesha indicates a lower potential for success, compared to Lauda’s chart. Indeed, their lives and careers confirm this astrological conclusion.

Hunt won the World Championship in 1976, during Jupiter-Jupiter. While Jupiter is not particularly strong in the main chart (the D1), it shows a lot of strength in the D10 (the subchart of career). There, it is exalted in Cancer, in the positive 7th Bhava. The fact that Jupiter is not yogic, made it hard for him to win again after the 1976 victory.

Hunt died in 1992, at age 45, of a heart attack. He was running Sa-Sa-Mo at the time. Saturn is in the 8th house of death while the Moon is the 8th lord. This double activation of the 8th House proved lethal to Hunt.

Saturn and Moon are in a mutual exchange (Parivartana), which strengthens both houses (2nd and 8th). This might explain the fact that James Hunt’s memory remained strong in the minds of the Formula One lovers – since the 8th house is also the place of post-humous fame.