Three gunmen attacked the offices of the editorial Charlie Hebdo in Paris yesterday, January 7th 2014, at 11.30 am, killing twelve people. As of now, one gunman has surrendered to the police, while the other two remain on the run.

The sidereal chart of the attack shows:

2. Mars (violence and fanaticism) on the ascendant and

3. Saturn (death) as ruler of Acqurius closely linked via a Parivartana yoga (exchange of signs) with the aggressive Mars. 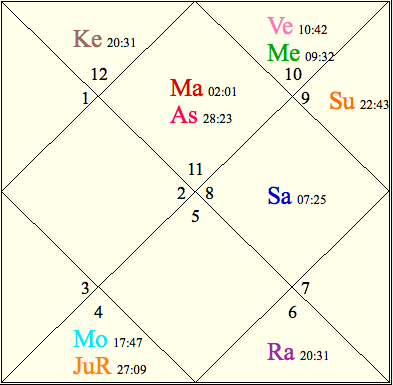 The 1st house of this chart represents not just the attack itself, but also the perpetrators. The 8th house from it is also the house of secrets and hiding and I will use it to glean where the terrorists might be hiding. The sign in this house is Virgo – which represents land with a body of water (lake or river) on which cultivated vegetation grows. The terrorists might be eventually found hiding in such a landscape. Given the overall self-destructive vein of the chart (which I’ll discuss in a moment) – they might not be captured alive. Given the tight relationship of the 1st house (of the body) with the 10th house (of career) in this chart, we might assume that they used to make a living through activities that required a lot of fitness and use of the body or personality in some way. These are physically tough and mentally driven people who are not afraid to act.

As a side note – the rise of islamic fundamentalist terrorist groups is associated with Rahu (the north node of the Moon) in astrology. Rahu is currently in the sign of Virgo (warfare) where it is aspected by an inflammatory Mars (via its 8th house away aspect). This aspect will continue throughout January. In consequence, we might see more terrorist attacks and warfare due to fundamentalism this month.

In the chart of the actual Paris attack, we notice Rahu in the 8th house of trauma, loss of morals, deviance from societal norms and death –  a most ominous placement indeed.

At the time of the attack the sign of Acquarius was rising (as indicated in this North Indian chart by the number 11 in the first house – Acquarius being the 11th sign of the natural zodiac). Acquarius is ruled by Saturn, which can be found in the 10th house, in the sign of Scorpio. Both Saturn and Scorpio signify (among other things) death and trauma. Scorpio is ruled by Mars, significator for violence and firearms. Mars sits in the first house. We notice that Mars and Saturn have exchanged signs (Mars is in Saturn’s sign and Saturn is in Mars’s sign). This exchange creates a link between these two planets and also between the houses they sit in: 1st and 10th.

When Mars is linked to Saturn in any way in a chart, it indicates emotional intensity and frustration. Mars and Saturn are antithetical in nature. Mars wants to rush forward impulsively, while Saturn is slow moving, pragmatic and prudent. This leads to a stop/start dynamic that can cause such intensity, frustration and dissatisfaction in an individual as to lead him to destructive and self-destructive behaviors. The perpetrators of this attack obviously had high levels of frustration and dissatisfaction with what they perceived to be irreverential behavior on the part of the Charlie Hebdo editors towards their religion.

Some might say at this point: how about the aspect of the exalted great benefic Jupiter on Saturn? Should it not soften the frustration and intensity, bringing some degree of equanimity and wisdom to the perpetrators? Jupiter is indeed a most positive planet and can do a lot to stabilize a person or a situation. Jupiter represents (among other things) – knowledge and righteousness. An exalted Jupiter can be likened to a glass full to the brim with knowledge. At times, such people feel: we know it all, we know exactly how it is, we don’t need anyone to tell us. They honestly feel they know the absolute truth, have a strong notion of what is right and what is wrong – and in the process can end up being blinded by their own beliefs. The exalted Jupiter is the equivalent of too much of a good thing, leading to something bad.

We notice in this chart how the kendras (houses 1,4,7,10) which are the places of action in a chart, are inhabited solely by malefic planets (in Vedic Astrology Mars, Saturn, the Sun and Rahu are considered malefic planets, indicators of harsh energy and suffering). The natural benefics (Jupiter, Venus, Mercury) are tucked away in dusthanas (houses of suffering) where the positive qualities of these planets are diminished and they lack the visibility and power of influence of the planets in kendras.

The ascendant of the chart is in Acquarius, a sign that resonates with structured groups and organizations. Acquarius people are driven to advance an agenda which has aspects of saving humanity and improving the world. These positive significations can manifest in beautiful ways under the right conditions. However, in this case, Mars’s fanatical, vengeful and separatist energy highjacks the good intentions inherent to this sign, diverting them into the an act of terrorism, undertaken on behalf of a terrorist group. The fact that the lord of Acquarius – Saturn – is in Scorpio, the most intense, secretive and vengeful of the zodiacal signs, does not help.

The Ascendant of the chart is in the Nakshatra of Purva Bhadrapada. A quick introduction to Nakshatras: in Vedic Astrology the zodiac is divided into 12 signs, but it is also divided into smaller constellations called Nakshatras. Each Nakshatra has a symbol and is ruled by a deity. The symbol of Purva Bhadrapada is the front part of a funeral cot. The funeral cot symbolizes death – both physical and metaphorical (in the sense of transformation). This Nakshatra is also associated with fire (in the form of a piercing lightening bolt) and heat, combustion and catabolic activities. It is a volatile and transformative force, that under the right circumstances can help burn through the veils of ignorance and delusion, leading to positive transformation and growth. Under negative circumstances however, the burning desire for change and transformation can take extreme forms of expression, leading to intense suffering and trauma. All in all, it is a very difficult asterism.

In Vedic Astrology, the Moon is considered to be the barometer of the day. The Moon on this day was strong in the constellation of Cancer, but it was located in the Nakshatra of Ashlesha. Ashlesha’s symbol is a coiled serpent and its presiding deity is Sarpas, the divinized serpent. As such, Ashlesha stands for anything associated with snakes. Snakes like to operate out of sight. They are proverbial for cold-bloodedness and for their poisonous, painful bites.

We can clearly see these qualities being played out on the day of the attack.

Let us pray that the wounds of this tragedy heal fully and do not lead to a social rift between the various religious groups in France and to a different treatment of the minority groups by the majority – a real danger following terrorist attacks.