Last week, it emerged in the media that two actors I admire greatly, Ben Affleck and Jennifer Garner are getting divorced after 10 years of marriage.
The divorce is said to be amicable, with both parties focussed on minimizing the negative impact of their separation on their three children. The statements the two actors made so far with regards to the divorce show that they are both dealing with this painful situation with a lot of maturity and thoughtfullness.

Here are the charts of Ben and Jennifer. The two share the same ascendant, making the compatibility analysis between the two charts so much easier to follow. The data is courtesy of Astrotheme. Note: the chart presented here uses sidereal zodiacal positions. 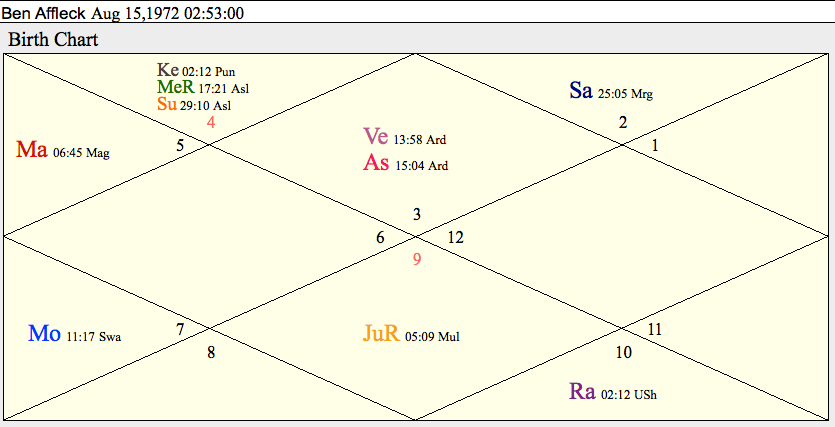 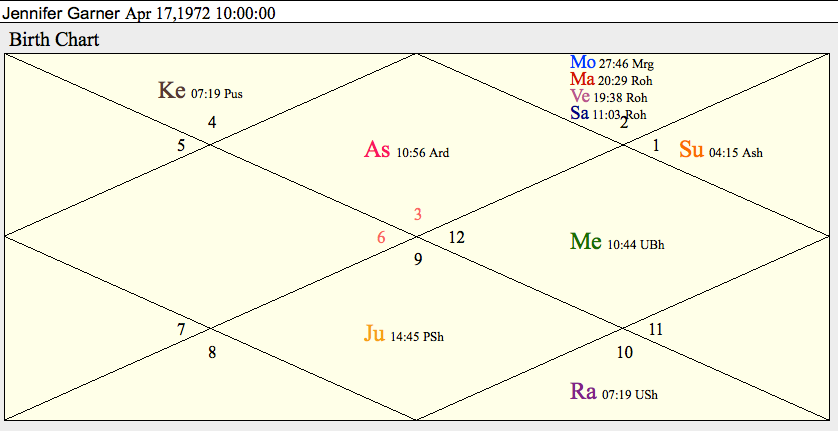 Ben and Jennifer share the same rising sign: Gemini – which is excellent for compatibility. Gemini is a constellation ruled by Mercury. However, Gemini is the vacillating type that finds it hard to commit. Or if they do, they often don’t work at it, because they are frequently distracted by other diversions.

They also both have Jupiter in the 7th house. This gives a tendency to idealize your partner and also a tendency to use relationship as a way of working on one’s issues.

1. Is the person likely to marry?

2. Does the person have good relating (relationship) skills? Do they work well with a partner in general?

3. What is the compatibility between the two partners, according to their charts?

1. Are Jennifer and Ben likely to marry? (we know, of course the answer to this, but I will still cover it)

Marriage is on the cards (highly likely) when the partnership/marriage house of the chart (the 7th house) and Venus (significator of relationship) are both strong.

Both Ben and Jennifer’s charts show a high likelihood of marriage. Jupiter rules Saggitarius, the sign in their 7th House, and can be found in its own sign in both charts. Venus is also on the strong side in both charts. Overall, both their charts indicate that they will definitely marry at some point in their lives.

2. How well do they relate to a partner in general?

For Ben we find that Mercury (ruling 1st house) has gone 8 houses away from Jupiter (ruling 7th house). Counting from Mercury, Jupiter is 6 houses away. This is called a 6-8 relationship and it indicates poor relating skills for Ben. It’s as if instead of clearly facing the partner and looking her in the eye, he looks a bit to her right while she looks a bit to his left. They don’t face and see each other. It is more of an adversarial position, reminding one of boxing partners, obliquely oriented to each other, ready to punch or defend. It creates a dynamic of secrecy (8th house) and confrontation (6th house). Mercury (Ben) is 8 houses away, so he is likely to keep secrets from his partners. Jupiter (his partner) is 6 houses away, so his partner is likely to initiate confrontations. All this can happen in very unconscious, hard to pin-down ways.

In studying Jennifer’s chart we also encounter a difficult situation. She is also represented by Mercury while her partner is represented by Jupiter. The two are in a 4-10 relationship. It indicates that in relationship, her attention tends to focus on the differences between her and the partner, rather than on their similarities – which breeds tension. It also indicates that she will always struggle with issues related to who will tend to the couple’s private life (running the home) and who will attend to its public aspect (the career).

In conclusion, both Ben and Jennifer have poor relating skills and will likely have the issues mentioned above pop up in all their relationships.

3. How compatible are they?

This is the third part of the marriage analysis and to accomplish it we compare the two charts.

For compatibility analysis we look at four fundamental areas of life: basic personality and way of operating in the world (represented by the Ascendant), style of emotional relating (the Moon), morals, ethics and values (the Sun) and sexuality (Venus). For a relationship to work in the long term, a couple should be compatible in at least two out of the four areas.

Ben and Jennifer share the same Ascendant – Gemini. They most likely found it very easy to live together and got along well on a day to day basis. The only issue is that Gemini is a dual sign that gives a vacillating nature – taking decisions together and staying committed to them might have been difficult.

Her Moon is in Taurus while his is in Libra. She is very earthy, pragmatic and sensual while he is of a more mental and detached disposition. In all likelihood she felt they did not connect well emotionally and felt that she needed more from him.

Her Sun is in Aries while his Sun is in Cancer. Again, a mismatch in the area of values. She values action and initiative, while he favors those things that feel intuitively right in the moment: whether that means taking action or not. While she enthusiastically follows her beliefs, he most likely goes for what feels right in each particular situation.

Venusian compatibility means the couple can have fun and socialize well together while remaining interested in each other sexually in the long term.

The couple that plays together, stays together. Alas, Ben and Jennifer are incompatible in this arena too! Her Venus is in Taurus, a sensual, earthy sign, while his Venus is in Gemini – a playful but mental sign. She expresses affection in a physical manner while longing to receive it in a similar way, while he is more inclined to verbal expressions of affection (Gemini is a verbal, mental sign). We see here a re-iteration of the Moon incompatibility – with her Moon in an earthy sensual sign and his Moon in a mental sign.

To summarize, Ben and Jennifer were incompatible in three out of the four crucial areas  – emotions, ethics/values and sexuality/affection. This makes for poor compatibility and a low chance of success as a couple over the long term. This high level of incompatibility requires a lot of work and effort to make the relationship work, especially when relating skills are also poor!

Indeed, when Ben Affleck accepted his best picture Oscar in 2013, he thanked his wife for “working on our marriage”, adding: “there’s no one I’d rather work with”. A huge compliment of course, but given its public nature and its timing, it clearly reflected the fact that a big part of their life together was in fact “relationship work”. When interviewed later and asked about this, Jennifer said that “we are definitely in a very mindful place where we’re making an effort to be together, do things at the same time and be loving”.

May they transition smoothly into single life and find more compatible partners that require less work in the future!

They really earned it, by the sound of it.