This time, his wife of one year, Amber Heard, alleges physical and mental abuse, “throughout the course of their entire relationship” and is seeking a restraining order against him. Depp and Heard met in 2001 on the set of the movie “The Rum Diaries” and got married in February 2015.

In the ’80s and ’90s Johnny Depp had a reputation for wild and passionate behavior in relationships. In 1994 he entered a very public and destructive relationship with supermodel Kate Moss which lasted four years. Depp and Moss constantly made headlines for their passionate and wild behavior.

In 1998 Johnny Depp became involved with Vanessa Paradis and had two children. For the next 14 years of their relationship his wild side seemed to subside.

Following Amber Heard’s recent allegations of abuse, Vanessa Paradis and his children have stepped forward in support of him, describing Depp as an extremely “loving, sensitive and sweet man” who was never physically abusive with them.

It is a very puzzling affair that left everyone wondering where the truth actually lies. 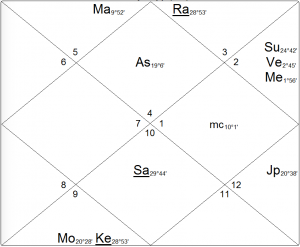 Depp’s ascendant is Cancer, infusing him with a sensitive and emotional nature.

The Moon (ruler of Cancer) is in the 6th house (obstacles, conflicts, arguments, enemies) in fiery Saggitarius with Ketu. When Ketu conjoins the Moon it can imbue the mind with wild imagination, bizarre tendencies, eccentricity and originality. At its worst, a Ketu Moon conjunction can turn a person into a perpetual misfit, a real weirdo prone to a lot of confusion and emotional instability. At its best, into an innovator, a genius capable of powerful and sudden insights. Being snake-like, Ketu can also impart a magnetic quality, a power to mesmerize.

Ketu’s influence on the personality can make the already sensitive and intuitive Cancer almost psychic. However, on its negative side, it can push it into extreme moodiness and paranoia.

According to mythology, the demon Rahu Ketu disguised itself as a God in order to steal the nectar of immortality. Depp’s performances often involve heavy make-up and extravagant costumes. He transforms himself so completely that he becomes almost unrecognizable: just take a look at Edward Scissorhands. 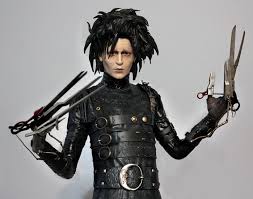 Rahu and Ketu also signify poisons and intoxicating substances. Depp’s love for wine is hardly a secret (he owns a winery in France and a bar in LA). He started smoking when he was 12 years old and became a chain-smoker. By fourteen he was using a number of drugs.

Ketu’s idiosyncratic influence on Depp’s personality and life is doubly powerful since, as a Cancer rising, the Moon represents both his physical body (as lord of the 1st house) and the emotional mind.

Over the years Johnny Depp has enchanted his fans with an extraordinary array of highly unique and bizarre characters. Here are some of them:

– a tea-drinking madman wearing his emotions on his sleeve (the Mad Hatter, see picture below) 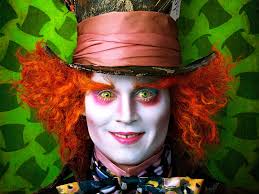 Depp approaches his characters from a unique and innovative angle that is often different from the original script.

In building the character of Jack Sparrow in Pirates of the Caribbean for example, Depp saw a parallel between 18th century pirates and 20th century rock stars – with their commanding energy, flamboyant dress and predilection for mind-altering substances.

He based Jack Sparrow on Rolling Stone guitarist Keith Richards and was almost fired from the movie by Disney movies executives. They were terrified that his off-beat take on the pirate’s life could lose them their core audience. They couldn’t have been further from the truth as Jack Sparrow became a massive success. 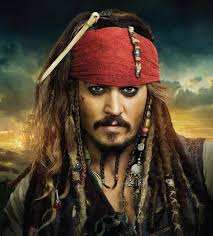 Johnny Depp’s chart has fewer yogas (combinations of planets that bestow fame and money) than we’d expect, considering his fame and success, but they are all very powerful.

Sasa yoga (pronounced Shasha) – is by far Depp’s most powerful yoga. It is formed by Saturn, the most powerful planet in his chart, sitting in the 7th house in its own sign. Saturn is also retrograde and has dig bala (directional strength) which further increases its yogic strength (but also its strength as an unsavory natural malefic).

Sasa yoga is one of the Pancha Maha Purush yogas (five yogas for a great man). Pancha Maha Purush yogas give the ability to exert influence over a lot of people. Sasa yoga imparts the maturity of Sani (Saturn) and his high work ethic. If Ketu’s association with the Moon makes Depp erratic at times, this powerful Saturn stabilizes his personality and ensures he keeps his focus on the important things in life.

Hamsa Yoga – another Maha Purush yoga, formed by Jupiter in a trikona from the ascendant. In addition, Jupiter is also in a kendra from the Moon, strengthening its influence. Hamsa yoga gives expertise in one field or another, discrimination and a strong moral compass.

Parvata Yoga – pthe “mountain” yoga which ensures that the native is on the upward escalator in life, building on a strong foundation of past good karmas and virtues/talents. This occurs in his 9th house of luck and opportunity, being formed by Jupiter (as dispositor of the Moon in a trikona from the ascendant in its own sign).

Kesari Yoga – formed by Jupiter in a kendra from the Moon. This is a powerful Kesari yoga since both grahas (planets) are strong. The Moon is almost full and Jupiter is sva. Kesari Yoga gives popularity and good networking abilities.

Budhaditya yoga – formed by Mercury and the Sun conjoined in the 11th house (entertainment). This is a yoga for intelligence and since it aspects the 5th house of the mind and of intelligence – it speaks of a very bright person.

Papa kartari yoga – this is a negative yoga formed when natural malefics (in this case Mars and Rahu) flank the 1st house. This makes the person feel they can’t make things happen in the world which can lead to frustration and all sorts of challenges (physical, mental, emotional). At least neither Mars nor Rahu are weak (debilitated, combust etc). A negative yoga becomes even more virulent when the planets involved are weak.

This negative yoga was activated between age 25 to 32, when Depp ran his Mars period.

Depp’s life began going off the rails at this time. The star dabbled with drugs and spiraled into a deep depression.

It was during Mars that he displayed his wildest behavior and showed a destructive part, like when he trashed a hotel room during a fight with Kate Moss and got arrested. So lukcy the Mars period only lasts 7 years.

This yoga was became active during his Rahu period, from 32 to 50. However, this time, Jupiter comes to the rescue. Rahu sits in the nakshatra Punarvasu, ruled by Jupiter. As a result, during its period Rahu also brings forth the blessings of Jupiter in this chart, the Hamsa yoga of discrimination and strong moral compass and the blessings of children (Ju represents children). This counteracted the negative Papa Kartari yoga to an extent, though not entirely (Depp separated from Vanessa Paradis during Ra-Ma and began his relationship with Amber Heard at the same time).

Depp had two children during Rahu dasha, thanks to Rahu’s invocation of Jupiter. The first child was born in Rahu-Jupiter and the second in Rahu-Saturn.

Depp’s 7th house (relationship) has a powerful Saturn sitting in its own sign, making this house very strong. This means that while averse to commitment (SA on the 1st House) he will definitely marry (strong 7 house of marriage).

From the 7th house Saturn also afflicts the 4th house of home, domesticity and happiness and the 1st of personality. Depp’s home situation as a child was truly traumatic.

His family moved 30 times before he was 12 years old. At one point the family spent a whole year in a motel. This had a deep impact on young Depp who became very introverted and a loner.

Also, this same Saturn aspect is probably the cause of his on-off depressions that made him turn to alcohol and drugs in order to cope.

The situation is not helped by Ketu (alcohol, unconventional approach to life, independence) that conjoins the Moon (mind and self).

His love and attraction for the unconventional seems to be what drew him to his current wife, Amber Heard. She is openly bisexual and a very independent woman. Friends have said about her that she is Johnny Depp in female form.

Johnny Depp is currently running Jupiter-Saturn-Mercury. What do these planets signify in his chart?

Jupiter is the 6th lord (divorce, conflict, legal battles), afflicting the 1st house by aspect. Already, natally, the Moon is in the 6th house giving a propensity for above matters, throughout life. If Depp ever consults a Vedic Astrologer he will be undoubtedly told: “beware of enemies”.

Mercury rules the 12th house (loss) and the 3rd (communications).

Thus, we see all houses of suffering – 6, 8 and 12 activated at this time, blending their meanings with the 7th house of relationship and the 1st of the self.

Perhaps even more potently, Depp is running Sadhe Sati. This is the transit of Saturn over the natal Moon and it started when Saturn moved into Scorpio 2 years ago. It will end when Saturn exists Capricorn (in 5 years’ time).

The Moon represents family members and close friends, our emotional security and happiness. Saturn stands for separation and suffering. Thus Sadhe Sati brings intense emotional suffering due to separation from those near and dear. Since he is running Saturn sub-period, the Sadhe Sati manifestation at this time is likely to be even more virulent.

Depp lost his beloved mother in April 2016 and is about go through a very contentious divorce from his wife of one year, Amber Heard. Due to the activation of all houses of suffering (6, 8 and 12) at this time and the Sadhe Sati, this is as hard and ugly as it gets.

Is she telling the truth about him? Is he capable of emotional and physical abuse?

Depp definitely has the potential for speaking harshly – Mars sits in his 2nd house of speech. pThe Papa Kartari yoga can make him at times a frustrated and maybe even destructive individual.

But his powerful Jupiter can definitely counteract all that. While going through the separation from Vanessa Paradis he confessed he was drawn to alcohol and drugs as a way to cope, but decided against it. He said he wanted to stay as lucid as possible – for the sake of his children.

There is no denying though that this is difficult time  for Depp, when themes of scandal, enemies and loss cannot be avoided.

As for physical violence? His chart does not support this. If he did indeed inflict the bruises on Amber Heard, it is likely to have been by accident.

After all, Jack Sparrow is as benign and friendly a pirate as one can find.